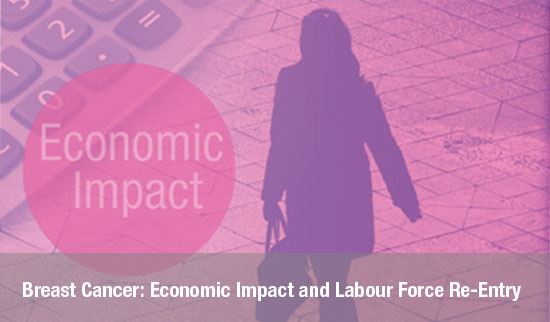 This report is the first comprehensive review of labour force re-entry following a breast cancer diagnosis and treatment. It examines the financial impact of breast cancer by highlighting the direct and indirect costs faced by Canadians and their families while battling this disease. The report firmly positions breast cancer as an economic issue as well as a health issue.

Breast Cancer: Economic Impact and Labour Force Re-Entry is based on a national survey of 446 Canadians with a recent breast cancer diagnosis. The survey was conducted in 2009 by Pollara public opinion and market research firm. Of those who participated in the online survey, 98% were women and 97% were of usual working age (18-64) at the time of diagnosis.

Actions for Change
Every year approximately 22,000 Canadian women are diagnosed with breast cancer. Their economic situation is one of the most important factors in their recovery. CBCN proposes a call to action for concerned organizations and individuals to join in a task force that will review labour policy, insurance benefits and workplace accommodation structures to better reflect the reality of breast cancer treatment and subsequent labour force re-entry. The taskforce will:

Special Thanks
The Breast Cancer Society of Canada funded the research and Janet Dunbrack wrote the report. GlaxoSmithKline provided the translation, artistic design and printing of the report.