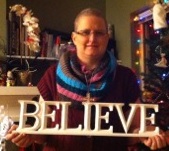 Patricia Stoop, 43, is a wife, mother, and home care occupational therapist living in a small city in British Columbia. In 2011, she found some lumps in her breast and was diagnosed with an aggressive, locally advanced HER-2 breast cancer. After undergoing chemotherapy, a bilateral mastectomy and radiation, she was told she was cancer-free in August of 2012. To celebrate, she went to Hawaii with her family.

But in April 2013, “the world dropped out from under my feet,” she says. At a follow-up appointment, her oncologist told her that her blood work showed cancer. She underwent a full-body scan, which showed extensive liver metastases.

“Hearing I had cancer the first time was pretty awful and scary,” Patricia says. “Hearing I had it again and it was metastatic was a hundred times worse. I was frozen with fear and often broke into tears. I was furious with God. I screamed then cried myself to sleep for a couple of weeks.”

A turning point came when a sad but beautiful movie about triumph against the odds inspired Patricia’s husband to suggest that she should fight cancer and believe in her treatment. “I did believe that medicine could be filled with miracles, that a higher power was working for us, and that I could become a cancer warrior once again.”

Patricia was prescribed a new medication, Perjeta. Her medical benefits from work initially covered the cost ($3600 per dose every three weeks), but then her benefits changed and Perjeta was no longer covered. “Again I was in despair,” she says.

Patricia had just discovered the lengthy process of getting new oncology drugs funded in Canada. They are first approved for use by Health Canada and then reviewed at both a federal and provincial level to determine if they will be funded by the province. This process can take two to three years. “If you have metastatic cancer, you may not live long enough to benefit,” says Patricia.

She decided to enter the world of advocacy. “I was not going to take that lying down,” she says. “I would approach the governments and tell them to hurry up the process so more people can live.”

In September 2013, Patricia attended CBCN’s metastatic breast cancer advocacy training. She then made it her full-time job to advocate for her own medication coverage and for the BC Cancer Agency to fund Perjeta.

“I followed the activity of the pan-Canadian Oncology Drug Review process,” she says. “I wrote letters to my insurance carrier, employer, union, other unions, different levels of government, and the cancer agency. I wrote an op-ed for the local paper in pink ribbon mania month (October) in Whistler and Squamish, BC, about the need to pay attention to metastatic breast cancer.”

Someone was listening. Weeks later, Perjeta was funded in British Columbia. Patricia believes her efforts sped up approvals.

In addition to her success in advocacy, Patricia was the grateful beneficiary of a fundraiser that her friends arranged for her. “I was able to stash away a good nest egg to be used for Perjeta and other treatments that weren’t covered,” she says.

Patricia remains on long-term disability and is a full-time parent for her two children, ages 10 and 12. She helps friends and acquaintances with cancer through advocacy and fundraising.

“For now there are many unknowns in my future,” she says. “I anticipate living with metastatic cancer as a chronic disease that will require some form of treatment for the rest of my life. I want to raise my children, return to work in some capacity and leave a legacy with respect to advocacy.

“There are no guarantees—I could just as easily be killed in a car accident as killed by my cancer returning with a vengeance. So I must truly learn to live one moment at a time and try to be mindful in each moment.”

To learn more about Patricia’s breast cancer journey, visit her blog at http://aftercancercougar.blogspot.ca/.