Losses from mBC: Vision and Fertility 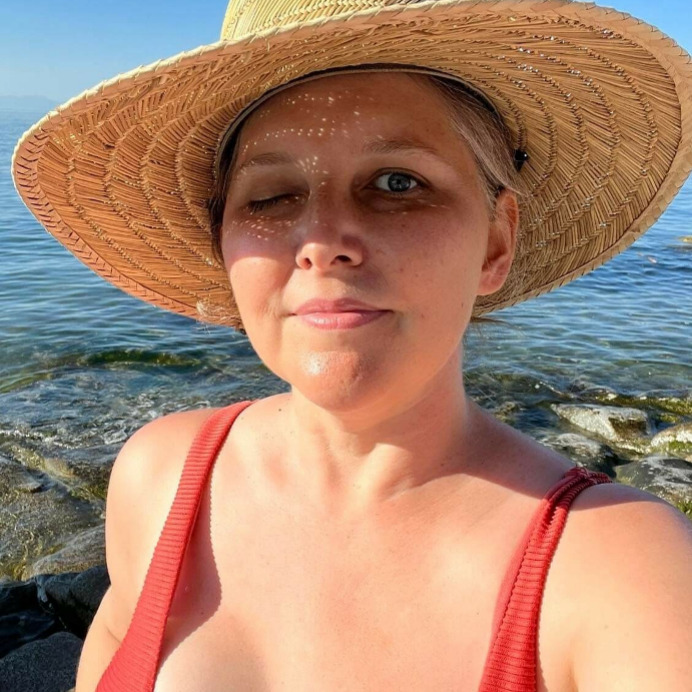 Five years ago, 2017, I had what I thought would be my last CT scan at the BC Cancer Agency. I was done. I busted out of there as if I was free, even though I had a mild concern about a weird, ongoing burp and GERD symptom. I was told this was anxiety and waited for the results thinking I would graduate from cancer world. This was the assumption from my medical team and something I thought could be true since it had been five and a half years since my early-stage diagnosis. Even though the fear of recurrence existed, I held strong like my oncologist did.

But the way back to the agency for the scan news was quick and I received this instead: “There’s something in your chest. Right in the center.” It happened to be a metastatic cluster of lymph nodes behind my heart, pushed against my esophagus and trachea. The explanation behind my burping symptoms. This news was a complete derailment of my life. Back to cancer treatment for life. I felt massive grief and trauma of stage 4 breast cancer defining the rest of my life.

At the time of writing this, I’m on my sixth line of treatment. It’s targeting my PALB2 mutation, also known as a HRD/homologous repair deficient cells which make clustering mistakes that are messing up my brain, left ear, left orbital and vision. I’m really grateful to get what I can, while I can, despite knowing and anticipating getting whooped a bit each time. The fatigue from treatment is insane and I’m still learning how to deal with medications for the side effects and pain.

There’s been so much that has happened in the last five years. A lot stolen. A lot of heartbreak, fear, weight changes, pain, and side effects from treatments.

Loss of vision and forced infertility are just a few of the ways stage 4 breast cancer has drastically altered my life.

Loss of vision
Recently, my vision in my left eye started to disappear slowly (70% visible). Then only a few days later, I lost about 70-80% of my vision. I can barely see a thing on my phone if I cover my good eye. When both eyes are open, my left peripheral only somewhat works a bit while the eyelid is drooped down and the whole eyeball is shifted left. The double vision that I was having earlier in the year before my treatment hasn’t been as bad, but now, it’s being able to see that is the problem.

Neck down, my CT scans show that I’m stable. But my brain MRI shows cancer progression. This progression is causing damage and nerve pain around my eye, as well as ear and temple pain. I feel so incredibly sad and worried. If only both my brain and full body could be stable together. I was offered brain radiation again and took it this time; treatments were from July 25th to August 4th. There are risks, possibilities that it won’t work and that it could cause permanent loss of left eye vision with a 10% risk. But I’m trying anyway. 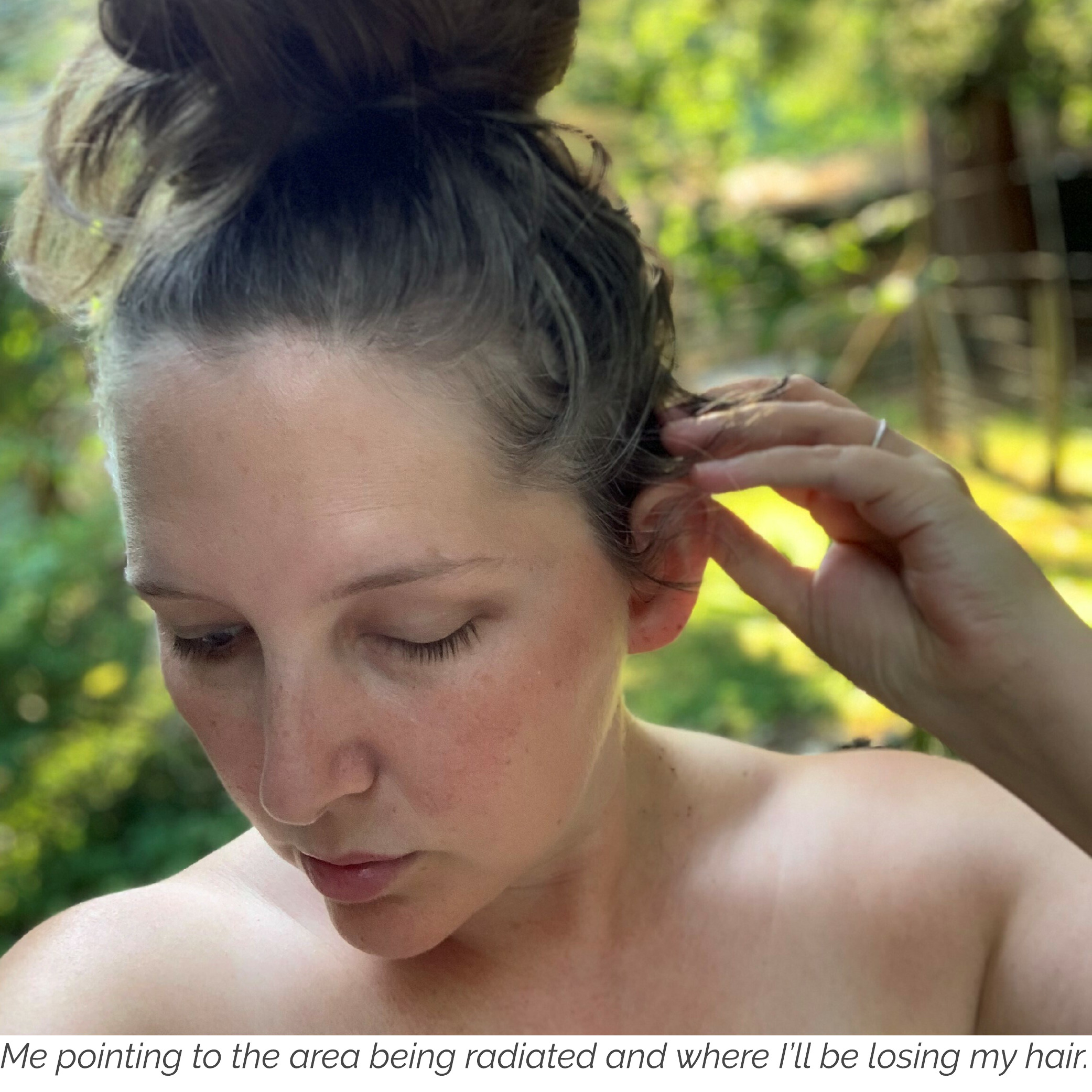 These past few days have been so stressful, difficult, upsetting, and challenging. At this time, my left eye is completely closed because of a brain met spot pushing on my orbit 3rd nerve. I wear various things to cover the eye and I try to operate with the loss of vision. But it is challenging. I can’t do my gardening, I need help walking in my yard and on walks, I need help with managing pills, pain, etc. All of it feels so unfair. But despite all the pains, progression, and loss of my ability to see fully, I am doing all I still can. Even if that means spending a lot of time resting, sleeping, and taking the slowest little walks with the people who care for me so much. Thank goodness for caregivers and animal love.

Cancer-forced infertility
It was Infertility Awareness Week a few months ago and the loss of not having a baby hit hard and the grief I felt, and still feel, is huge. Yet personally, I’m not truly infertile and repeated IVF is not a thing for me.

Cancer and treatments were what got in the way of my dream to be a mum and to see Mike as a dad. I did IVF preservation of 10 embryos in 2012 as a Plan B in case chemotherapy for early-stage breast cancer rendered fertility issues. It didn’t. But having an estrogen fed (ER+) breast cancer meant standard treatment of temporarily turning off ovaries with Zoladex injections and anti-estrogen pills for five years. That meant that there was no ability to try for a baby until I was finished five years of treatment. I finally reached the five-year mark in 2017 and within a month my cycle returned fast. I was told to wait six months for the drugs to be out of my system before trying to start a family. To feel safe, I asked for a CT scan when I hit that point and discovered I was living with stage 4 cancer in my lymph nodes and lung. My plans of parenthood were instantly derailed.

After a biopsy, it was confirmed that the rogue cells were ER+ fed again; the same initial cancer I had five and a half years earlier had returned. I was completely devastated. Not just because treatments would now be for life until death, but also because becoming pregnant was no longer an option. I immediately went back to ovarian suppression on Zoladex and began my first line of treatment for incurable stage 4 mBC.

No more trying for a babe. No more future pregnancy plans. No more parenting opportunity. All attempts to carry a child were taken over by having metastasis and treatments to slow it. The 10 embryos that had been cryopreserved in 2012 were preserved in a slow freeze versus a fast freeze. Even our attempt in 2018 to have a surrogate bring one of our 10 embryos to life failed. Not one of them survived the slow freeze. I often think about the fast cryogenic method we missed.

The term “Infertility” to describe my case isn’t exactly accurate. I could have had a family without a diagnosis at 28; had it not returned five and a half years later, and if we had the opportunity. Our ability to try was stolen. It was cancer-forced infertility. Cancer caused our loss to even try.

Despite all this
While so much has been lost in the last five years, there’s also been many good days and experiences too; great adventures, last minute trips, big YES decisions, really meaningful moments, creative projects, and impactful connections in the community. There has been hope, wishes, magic and releases. When I’m physically able, through brain mets, intense fatigue, treatment side effects, and visual struggles, I’ll often make it outside in nature. For a different kind of rest. To escape. To take in all I can. Even if it’s a challenge and even when things feel difficult, I grasp onto life and breathe in every precious bit. So much matters, despite how much feels hard. Five years with stage 4 metastatic breast cancer and I’m still here today and holding on to being alive so hard. Holding on to all my loves, moment by moment, and every little piece that is still possible.