Strangers’ reactions and how I handled them 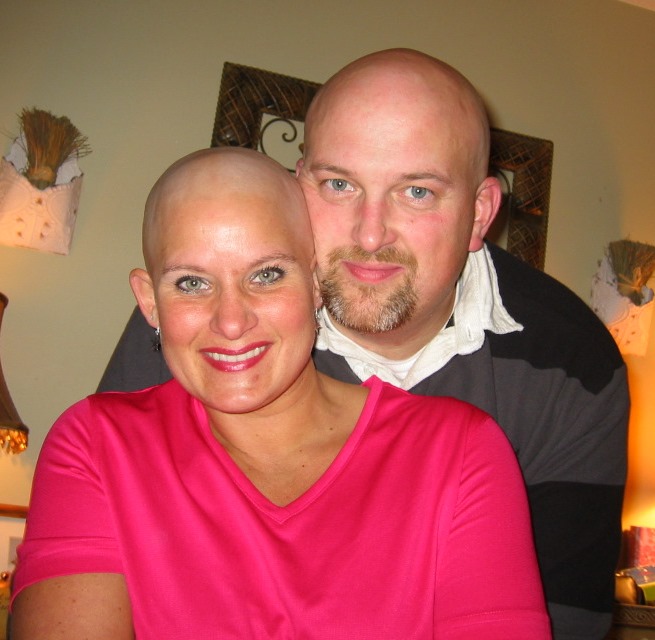 I found a lump in my left breast by accident in the summer of 2006, shortly after I had turned 40. After a mammogram and biopsy, I was diagnosed with breast cancer. It was multicentric DCIS and quite aggressive. In short, this led to a whirlwind treatment and surgery plan that involved chemo, a bilateral mastectomy, radiation, a hysterectomy and eventually reconstruction surgery. I was determined to learn everything I could and to fight this cancer with everything I had in me. It was not going to break my positive and optimistic outlook on life. With my husband, our two young children and our families beside us, we were going to tackle this one day at a time.

As I ventured into chemo world, the messages I was getting from friends and family really helped me to continue my positive and optimistic outlook each and every day. Most days were pretty good, but I had some times that I would be out in public doing ordinary things like going to the grocery store, pharmacy or the post office and people would often stare at me. After all, I was bald, so most people would assume that I had cancer and was probably dying a slow and horrible death. I know because that is what I used to think when I would see a bald, young person with very pale skin. I would feel sorry for them and either stare or purposely look away and ignore them which I think now is even worse than staring.

I found it hard because on one hand I was trying to be positive and I wanted to be treated the same as anyone else but on the other hand I wanted to scream at people sometimes.

Once I was in line at the pharmacy and there was a child in the line ahead of me with his parents and the child was openly staring at me. I smiled and he looked like he was scared to death of me. My first instinct was to stick out my tongue and then yell at the kid, “What is wrong with you? Haven’t you ever seen a bald lady before? Don’t you know that I have cancer? STOP STARING AT ME YOU LITTLE BRAT!!!!!!!” However that would have been rude and inappropriate and probably would have marked him for life. Not to mention that I’m sure his parents would have freaked out on me too.

My second instinct was to just run out of the store and get into my car and drive home as fast as I could and go into my house where I was safe and never go out in public again. I didn’t do either of those things of course. I just stood in line feeling those little beady eyes on me and trying to breathe normally and stay calm and act like everything was perfectly okay. I took some deep breaths, swallowed the lump in my throat and made the decision to just try desperately to act normally whenever this situation might come up another time. I didn’t want to hide away. Well maybe I did, just a bit. But I wasn’t going to let this stupid cancer do that to me. I was too stubborn for that.

Another time I was shopping at a store and an older lady, probably in her late 70s, came up to me and touched my arm and point blank asked me if I had breast cancer. I was a bit taken aback and I suppose I could have said that it was none of her damn business but I just said, “Yes I do”. She said to me, “Don’t you worry. My daughter-in-law has it and she’s going to be okay. You’ll get through it and you’ll be fine. Now you take care of yourself.” I just said thanks to her and smiled, weakly, and stood there and watched her walk away. I wasn’t sure if she was trying to make me feel better or trying to make herself feel better. I knew she meant well and I appreciated her words but I also kind of felt like my personal struggles in my personal space had been violated. This emotional yo-yo was an element that I hadn’t really been prepared for. These little situations could really play on your mental and emotional state if you let them.

People I did know would often ask me how I was doing. Others would ignore the elephant in the middle of the room. Still others would cry when they saw me. Some were simply curious and would ask if it was okay if they asked me things about the cancer and the treatments. That was fine with me. It really didn’t bother me when they asked that way and I appreciated this approach the most.

It’s always a tough thing to know what to do or what to say. It’s kind of like when you see someone who has recently had a loved one pass away. You just don’t know how to deal with it because we are all so different in how we react to these delicate situations. You don’t want to be too cliché but we all seem to get pulled in different directions as to what to say and what to do. I think the best thing to do is to just be yourself and hope the other person will understand that your intentions are sincere.

I am now six years cancer-free and when I look back on everything that my family and I went through it can be very overwhelming and hard to believe that it actually happened. But it did and today I am happy, healthy and thankful for each and every day.

Read more about my breast cancer journey on my blog at http://itsnotforeveritsjustfornow.blogspot.ca/.