Humour in Times of Crisis pt. 2 - Excerpts from Angel in the Marble 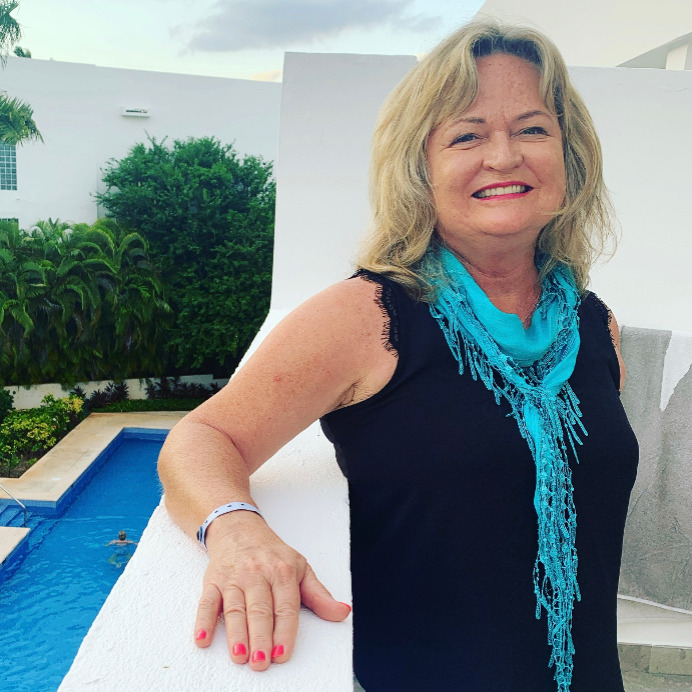 This is the second in our Humour in Times of Crisis two-part blog series. If you haven’t read the first post, you can find it here. Anne Kristiansen lives in White Rock, BC, and is an art historian, teacher, writer, and a survivor of Triple Negative breast cancer. She wrote her book, Angel in the Marble, throughout her diagnosis and subsequent treatment. The book deals with her experiences with doctors, mastectomies, chemotherapy, self-esteem, and other challenges faced by breast cancer patients in a real, honest, and often very funny way.

Signed copies of Angel in the Marble are available to order on Anne’s website. The following is an excerpt from her book.

Eye of Newt
The minute you get a cancer diagnosis, you start looking for the magic cure. For me, this meant researching the hell out of the disease and revamping my lifestyle, exercise regime, spiritual practice, and diet. Within days, I knew the latest cancer breakthroughs and snake oil salesman’s remedy for the problem. And I took on the task of miraculous cure (and possible canonization) with a vengeance. Turmeric was the new gold standard. I popped four pills a day and drank Indian golden milk and turmeric lemon tea morning, noon, and night. My skin oozed Trumpian orange, my countertops glowed with permanent yellow stains, and man, did I feel good. I knocked back shots of apple cider vinegar chased by pomegranate juice. I downed hemp hearts, chia, flax, and bee pollen. My daughter Sonja arrived one day with the Holy Grail—a Vitamix— and it became my cauldron, a sacred vessel for preparing healing concoctions laced with kale, ginger, blueberries, and coconut water.

I stopped short of incantations, but embraced mantras containing the words: “antioxidants, alkaline, and fibre.” Red meat was banned from the house as was anything not labelled organic. I purged the pantry and erected an altar to organic teas. The new cappuccino machine lay silent, gathering dust. My practices took on an almost religious frenzy. I created converts and they took on my zealotry. After chastising my husband for trying to sneak a steak into the house, I found him preparing meatless meals for Monday nights. The cat was now eating organic—three-dollar tins of humanely raised chicken pâté (if only she knew how to catch a mouse). Things got a little crazy, as extremist movements can. One day, I became enraged when “free run,” instead of “free range,” eggs entered my house. I stayed up nights in anguish over whether avocados were one of the evil “dirty dozen” pesticide retaining foods. I started to pop apricot kernels (revered by an obscure cancer-free tribe in Northern Pakistan) to feel better— one kernel became two, then four, then a handful just to get through the day. I caught my husband secretly mainlining hibiscus tea, claiming the fuchsia fix was a blood pressure miracle. We were down, we were out, we were hooked. The holistic hysteria in our home was real. Then chemo day arrived. The arsenal of kale smoothies and turmeric milk lay loaded in the fridge. After a bleary morning of chemo infusion at the hospital, I fell into a post treatment sleep with visions of Medjool dates dancing in my head. I awoke from my toxic cocktail nap and dragged myself to the kitchen.

My husband looked wild-eyed, clearly revved up on goji berries. I opened the fridge, reached for my green stash and suddenly the dry heaves came over me. The thought of one kale leaf or piece of raw ginger was turning my stomach inside out. Searching frantically through my Whole Foods-worthy pantry, I screamed, “Don’t we have any crackers, a piece of white bread, a Pop-Tart?” A calm came over my husband. He quietly walked toward the pantry and moved aside the bags of chia seeds, organic long grain rice and apricot kernels. With a solemn gesture, he revealed a box of Saltines and a 6-pack of full sugar ginger ale. This guy sure knew me. The hidden treasure seemed to emanate a certain glow (or perhaps it was the chemo fog I was in). Though I can’t be certain, I think I heard angels sing. The Eucharist, the Holy Supper, it beckoned me into the light. My stomach calmed, I became filled with gratitude. Double, double toil and trouble, fire burn and cauldron bubble. MacBeth’s hags be damned! The darkness receded. A sweet, simple calm enveloped me. Thoughts of childhood, comfort food, mother love—returning to the source. I was saved. Hallelujah!

Doogie Howser’s Little Brother
Eight months after my first surgery I went to the plastic surgeon’s office for my bi-weekly fill in preparation for breast reconstruction. It had become routine. Fill up with gas, pick up my dry cleaning and get my breast injected with saline fluid. At this point, I was through the chemo and even able to work a bit doing professional development at home for my college classes. Grant and I were actually planning a trip to Italy the following summer. The fear of dying had receded but was still there in the back of my mind. I was told Dr. McDreamy was out of town attending a breast convention in Toronto. Seriously? “Bye honey, I’m off to a breast convention in Toronto. See you Monday!” For my husband, it’s a big week when garbage day includes organics. Some guys are living the dream. The nurse assured me that Dr. McD’s colleague was an excellent doctor, so I trundled into the examining room without a second thought.

Minutes later, a prepubescent young man walked into the room and asked me how my day was going. He was clearly no older than fourteen and had the distinct smell of Clearasil wafting about him. He introduced himself and a quick glance at the diploma on the wall confirmed my darkest fears. This was my doctor. His credentials were there in black and white - though I still had my suspicions about any medical person graduating in the 21st century. He was tall and gangly with what looked like slight traces of acne on his cheeks. And were those braces on his teeth or the sun reflecting off my progressive lenses? He definitely had a slight crack in his voice and there was just a whisper of a beard beginning to appear on his chin. I sat self-consciously on the now familiar crinkly paper of the exam table. At the same time, I was strangely amused. The next thing I knew this fresh-faced young man asked me to remove my top. Woah! I was pretty sure I remembered this guy from high school. Only he hadn’t changed a bit and, well, I had certainly “ripened.” If I was a fine wine, this guy was still a Concord grape on the vine. He seemed to sense my discomfort. Blushing profusely, he asked if it was okay to proceed. It was as if he realized that I could be his mother (or, more realistically, his grandmother). There was something charming about his embarrassment and I sensed he wasn’t used to doing this. I insisted I was fine. Just a momentary hesitation. He pulled out the syringe and injected the solution with a tender precision. Bull’s eye! The procedure went off without a hitch and I could tell that he felt relieved.

I was given instructions to book another appointment and remove the band-aid in a few hours. He seemed to be averting his eyes and donning his most compelling professional attitude. But it was clear to me in that moment that this had been his first time. I couldn’t help thinking we should be sharing a cigarette.