Moving forward to the new me 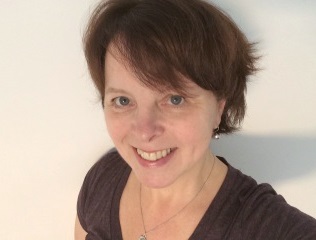 “Great to see you back to your normal self,” a friend said to me recently. I nodded, and smiled my best fake smile. It’s been three years since my original diagnosis of breast cancer, two years since the end of treatment, and 18 months since my bilateral mastectomy. I've been bald, radiated, sliced, diced and pieced back together. I am strong. I am happy. But I am nowhere near “back to my normal self.”

“Normal” was thrown out the window one Friday afternoon when my doctor called to tell me my test results.

“It’s malignant,” she said, “and it’s worse than we thought.” She wouldn't know more until the following week, so the next morning I went away with my partner, Jim, and we tried to pretend that there wasn’t a chance I might die. In a hotel bed, in the wee hours of the morning, my imagination took me down dark and terrifying roads. Plucked from my safe cozy world, I was hurled into a frightening new one—the world of cancer.

My surgeon told me I'd need lumpectomies and chemotherapy, followed by radiation or a mastectomy. There were two tumors, one in either breast. He said a lot of other stuff that day but the only word I heard was the word “treatable.” Jim and I hugged each other tightly, and allowed ourselves to breath. Then, knowing I had a future, I began to prepare for it. Time to kick some ass.

I bought a large daytime organizer, and filled almost every single square with appointments; biopsies, ultrasounds, chemotherapy appointments. When I wasn't at the hospital, I was visiting a naturopath or practicing yoga. I read voraciously and jammed my brains with words like “lobules” and “ductal carcinoma.” Our fridge, formerly full of camembert and wine, now bulged with kale and bok choy. Jim shaved my head and we celebrated with a tiny glass of champagne. I bought new hats to accompany my new hair, and started a blog. In short, I was a warrior.

For a year, cancer was my job. I stopped working, and devoted myself to getting healthy, doing everything in my power to reduce the risk of recurrence. The hospital became a second home, and I grew to love the dedicated doctors and feisty nurses that took care of us. During treatments, I’d think about the things I planned to do once my life got back on track. Drive to Arizona, play tennis, run a marathon. Then finally my treatment was done, and without any signs of cancer in my body, I was free to go back to my old life.

Then my universe came crashing down. The woman who had once sailed through chemotherapy was now crying in a corner. The doorbell would ring, and I'd stand frozen, too paralyzed to answer. I'd reach for a cup on a high shelf, and unable to grab it, would start sobbing. I had no interest in yoga classes, or making my stupid kale smoothies. I resisted social invitations because most people were annoying, and I had no interest in their problems. If it weren't for my dog Jed, I probably would not have changed out of my pajamas. My inner warrior, apparently, had lain down her sword.

What nobody told me was that the time following cancer treatment can often be more difficult than the year of the diagnosis. Leaving the safety of the hospital environment, the focus shifts sharply from being a patient, to getting back to normal. But the problem was, I’d changed. I was no longer the person I was before my diagnosis, and was unable to insert myself back into my old life. The old me no longer existed, and the new me didn’t know where I belonged.

To the outside world I looked like my old self.

My hair was growing back, my boobs were rebuilt, and my scars were covered with clothes. I’d managed to stay fairly active and had kept busy through yoga, and walks with Jed. (Mind you, Jed is a Bassett hound, so although I never reached any high speeds, I still got some fresh air). Outwardly, I appeared normal. But inwardly, I was a mess.

Prior to my diagnosis, my memories, feelings, and expectations all existed in a somewhat orderly fashion inside my head. Then I’m dropped into this unexpected world of cancer and was faced with a tsunami of devastation, hope, sadness, grief, gratitude, shock, kindness, sorrow, and despair. My warrior, bless her heart, had kept all these emotions at bay. But when she left, everything flooded over me and under the weight of all these unprocessed feelings, I collapsed.

My lowest point came one sunny afternoon, almost a year after my first surgery. I was driving in my car when I realized there were tears running down my face. I kept driving until I couldn’t see any more, and then I pulled off to the side of the road where I put my head on the steering wheel and sobbed by eyes out. I couldn’t remember where I was going and I didn’t care. I was losing it, big time.

The next day I called a friend and announced that I was going crazy. I told her that I was lost, depressed, and unable to cope. The advice she gave me saved the day. She said, “Just because you’re having a meltdown doesn’t mean you’re not coping.” I realized that I was using all my energy to hold myself together, when what I really needed to do was fall apart. The “new me” and the “old me” were struggling to live together, and they made terrible roommates. My original mental structure could not house them both. So falling apart was essential to my healing, in order that I could start to rebuild.

From then on I felt like I was learning to walk again, carrying the weight of a new person, and shedding some of the old. I carried with me a new compassion, but no longer had the burden of judgments. I had a new understanding of mortality, but also an awareness of courage, and the human spirit. I knew fear, and I knew fearlessness. Worry was a heavy load, so I ditched as much as I could, to make room for courage. And I reorganized my friendships, eliminating those that weren’t healthy, while making more room in my heart for those I love.

My wobbly baby steps eventually became longer strides, with lots of stumbling in between. My shift in values, apparently, had completely thrown me off balance! But eventually I steadied, and felt whole inside, as though all the pieces finally fit together. These days my mental core is strong, and with this strength comes increased flexibility to allow for all that this magnificent life may throw my way. I’ll probably never run a marathon, and I don’t like tennis, but I like who I’ve become. So when my friend said I was “back to my old normal old self,” I was speechless. There is no “going back” and there is no “old me.” And as for normal, that may never happen. But I’m still rebuilding, I’m still healthy, and I’m still moving forward to the new me.

About the author: Janet MacLeod is a breast cancer survivor living in Toronto, where she works as a buyer/stylist in film and television. Her initial diagnosis of bilateral breast cancer was in July 2011; the cancer in her left breast was Stage I and the cancer in her right breast was Stage II. Since then she has gone on to have a bilateral mastectomy with immediate DIEP reconstruction in 2013. Her cancer was treated at Mount Sinai Hospital, and her reconstruction was performed at Toronto General Hospital. Check out Janet’s blog at http://balderdish.blogspot.ca