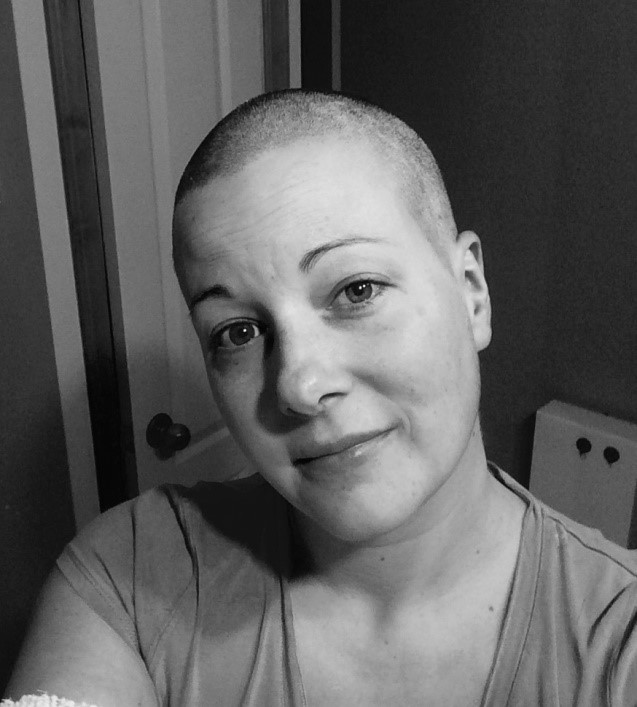 When the nurse phoned me at 8:30 a.m. on December 15, 2015 to ask if I could make it to the hospital the same day, I knew it was serious. Receiving confirmation that same morning that I had breast cancer was devastating.

The diagnosis: stage III, HER2 positive and hormone receptor-negative inflammatory breast cancer with bone abnormalities located at the sternum and at one vertebra.

As the mom of three young children (two boys, ages 6 and 3, and a thirteen-month-old daughter), I couldn’t help but think the worst. I could not stop crying.

It was urgent for me to go through all the required testing to determine the extent of the cancer. I had to get a breast ultrasound with a biopsy, a mammogram, a chest X-ray and an abdominal ultrasound the same day. I met with the oncologist in the afternoon.

It was one appointment after the other, but the tears kept coming. I was telling myself that it wasn’t real. That everything was going too fast. That it was impossible. That I couldn’t die right now.

The oncologist I met that afternoon said something that I will never forget: “We need to put out the fire. Now.” Everything was going quickly and his remark kept my mind busy while bringing me comfort; I was taken care of. The nurse navigator referred me to a psychologist.

Back home, I surfed the Web. Inflammatory breast cancer is aggressive and spreads rapidly. Chances of survival are low. It wasn’t very reassuring, so I stopped reading. I had panic attacks and suffered acute anxiety.

Getting a diagnosis had taken several weeks. It all started with redness on my breast, which my doctor thought was irritation related to breastfeeding. One week later, there was a small lump and my breast felt warm. Mastitis was the verdict. I left with a prescription for antibiotics for seven days. After six days of treatment, nothing had changed. I then tried a different antibiotic and got an appointment for a breast ultrasound three days later.

I was told during the ultrasound that everything looked good and that there was no sign of an abscess or cancer. The doctor I then met observed that I was not responding to antibiotics (mastitis is usually almost gone after 48 hours of treatment). He asked for advice from a gynecologist who referred me to a microbiologist. After ten days of antibiotics injected intravenously, the microbiologist on call told me the diagnosis was wrong since the redness and the inflammation were still present. She took pictures and said that she would consult other specialists before getting back to me.

I received a phone call from the breast-screening clinic and an appointment was set on December 10 for a breast biopsy and an axillary lymph node biopsy.

The verdict was issued on December 15: inflammatory breast cancer.

I started chemotherapy three days later. I received two treatments of fluorouracil combined with epirubicin and cyclophosphamide and four treatments of Taxotere combined with Herceptin. I was also given Emend for nausea, dexamethasone to dilate my blood vessels, prochlorperazine for nausea and anxiety, Neulasta to promote production of white blood cells that fight the infection, pregabalin for joint and muscular pain, Imodium for diarrhea, Ativan for anxiety, and codeine for headaches.

It was such a relief in February when I learned from a geneticist that I did not have a BRCA1 or BRCA2 gene mutation! However, the geneticist recommended that my sisters undergo annual mammography and a preventive MRI. My daughter will need to begin screening at the age of 25.

According to the surgeon, I require a mastectomy of the left breast. Several lymph nodes are suspect and need to be removed. The muscle seems to be intact. The redness has decreased. I must undergo a MRI in May to verify if the treatments are effective and a bone scan in April to check bone lesions. My operation is scheduled early in June, after my MRI.

Today, I feel more serene and resilient towards the disease because I do not have a choice. I tell myself that surviving will make me the exception for this type of cancer. I focus on my treatments, one day at a time. I would like to know the prognosis in advance, but with this type of cancer, it is impossible to know before the end of treatments and the results of tests to come.

I continue therapy, and so far, everything is going according to plan. I lost my hair, my complexion is paler, I have circles under my eyes. I also suffer from nausea and joint and muscular pain. I feel more tired and less energetic than before. But all of this might save my life. It’s not so bad.

Yes, I do sometimes cry. However, I refuse to give any significance to my tears to avoid letting them get to me. I want to be there for my children for as long as possible: that’s all that matters.

No one has control over cancer. Treatments exist and research is conducted. But nobody can tell us if our body will respond to it, if the disease will progress, if we will die or survive. We are all different. Consequently, we respond to treatments differently. The only element over which we have control is our perception of the disease and the way we live with it.

Caroline, age 34, lives in Saint-Hyacinthe, Quebec, with her husband and her three children.

I completed my first course of treatments, and I underwent a bilateral mastectomy on April 27.

I received the confirmation that I had bone metastases at the sternum and on the D11, D12, and L2 vertebrae. Again, I started six chemotherapy regimens (Herceptin, Taxotere, and Perjeta), hoping to control and reduce the metastases. After, I will need radiation therapy at the neck, chest, and armpits.

According to statistics, I might still have four or five years ahead of me if everything goes well. But since I am like no others, I will skew the statistics and live much longer.

My spirits are good and I’m doing okay, even though this regimen is physically more exhausting and my body is feeling it.

We take it one step at a time. I even participated in a television show for the Moi&cie channel.

It can now be said that my disease has reached stage four.

But these are only numbers.