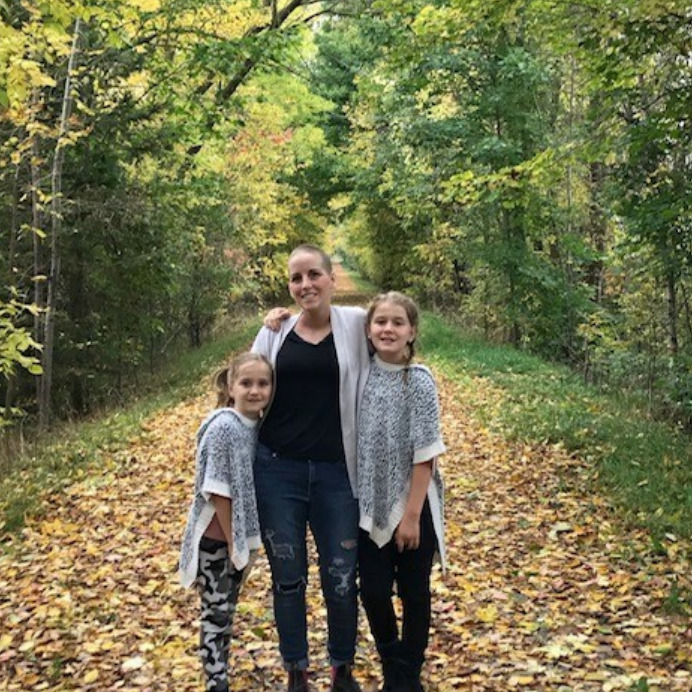 Stacy Zelazny lives in a tiny town in Ontario, literally. She resides in a little-known place called Tiny, Ontario. Stacy describes herself as a mom of two amazing girls who is married to her best friend and winning the biggest fight of her life.

When Stacy first felt a lump in her breast, she dismissed it. She had no reason to worry; she was young and there was no history of breast cancer in her family. During one of her annual checkups with her family doctor, she brought up the lump she had felt earlier, still not too concerned. As a precaution, her family doctor ordered an ultrasound since she was too young for a mammogram. Her healthcare team was also not too concerned, assuming that it was nothing, probably just a cyst. Stacy was told to keep an eye on the lump, and should it change, she could give them a call back.

While her healthcare team was not concerned about the lump, she began to worry about it. So much so that once home, she received a call from her doctor asking her if she was okay since she seemed very concerned about it. And she was worried. At this point, the lump was now 5cm across her chest.

“There’s something there”, she told her doctor.

At that, her doctor referred her to get a biopsy done. The result from the biopsy came back in and in March 2021, Stacy was diagnosed with invasive ductal carcinoma at just 35 years old.

Stacy began her treatment process, meeting with a local general surgeon and the plan was to perform a lumpectomy. She was also to get genetic testing done, but because there was a queue, the timing of when that could be done was uncertain. Stacy had been speaking to a friend about her diagnosis and her friend recommended Dr. Renee Hanrahan, a breast specialist out of the Royal Victoria Regional Health Centre. Dr. Hanrahan told Stacy about a rapid genetic testing study that was being conducted by Women’s College Hospital and she suggested that Stacy join it in order to get the results of a genetic test quicker. The results from the test would help determine whether Stacy’s treatment should involve a double mastectomy or a lumpectomy.

Stacy joined the study and was sent a testing kit that required a simple saliva sample. She sent the sample in and received the results over the phone. She was a BRCA2 mutation carrier. The results meant that a lumpectomy was off the table and her treatment plan now included a double mastectomy and chemotherapy. The results also meant that other family members were tested to see who else was a carrier of the gene mutation. It turned out that both her father and her second eldest sister were carriers. It also means that her two daughters will also have to be eventually tested.

While being diagnosed with breast cancer was shocking, Stacy is grateful to have been involved in the study and that the cancers were found early enough that they hadn’t spread. She is also thankful that she advocated for herself after being told for 6 months that the lump was nothing. “Check those boobies, be proactive, and always ALWAYS advocate”, Stacy urges.